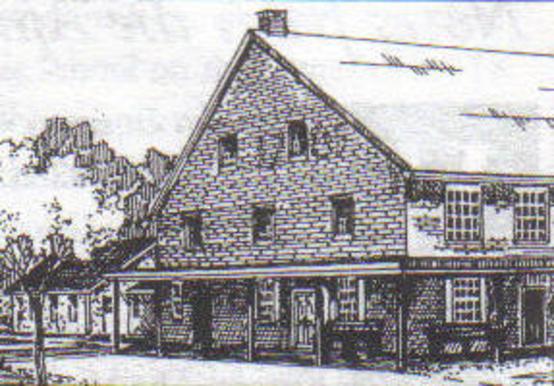 "Quakerism" is not about old buildings -- or even newer ones.  The most important thing that a Friends meeting can do is to hold a Meeting for Worship each week.  But, if you need more history, here it is.

a subordinate of the monthly meeting in Salem.  In 1720 it bought its first

later built a small frame meetinghouse.  As the meeting grew, a larger

meetinghouse was required, so a brick structure was begun in 1783 and

requested that they become a “meeting of record,”  that is, a monthly

meeting, and that was approved by 1794.
In the 1820s Friends reported on the imprisonments and fines imposed

upon individuals for refusing to participate in military exercise -- the militia.

In following years, some took advantage of laws exempting members of fire

adjacent to the meetinghouse to be the home of a hand pumper.
More growth prior to the Civil War necessitated the expansion of the meetinghouse and at the beginning of the twentieth century an annex was constructed in the rear.  When North Main Street was widened and paved in 1910, the brick wall fronting the Meeting property was removed.  Bricks were “recycled” to build a low wall in front of the newer cemetery on West Avenue.
About a year before the Great Depression the name of Pilesgrove Monthly Meeting was changed to Woodstown Monthly Meeting and major changes were undertaken.  The partition dividing what had been the men’s and women’s meetings was removed, creating a single large room for meetings for worship and business. Also, all seating was removed from the balcony to make classroom space for religious education.  By mid-century Woodstown was regarded as home to one of  -- if not  -- the largest Friends Sunday Schools in the world.  More building at the end of the twentieth century:  the Social Room wing was constructed and the annex kitchens were expanded.  Money was loaned to Friends Home for its building project and a building grant was made when it became Friends Village.  Another building grant was given to Friends School.  In 2010 the entire Meetinghouse complex was made compliant with the Americans with Disabilities Act.