More dates and details if you need them:

1719: Permission requested from Salem Monthly Meeting to hold a

regular Meeting for Worship at the home of Roger Huggins.  Later,

this Meeting for Worship was held at the home of Aquilla Barber.

ground [located approximately in the “L” defined by the present

driveway and parking lot].
1725: Pilesgrove Friends build a frame meetinghouse in the rear

of the lot now occupied by #1 Marlton Road.
1783: A new brick meetinghouse is begun.
1785: The new meetinghouse is finished.
1786: Salem MM collects 90 pounds to help defray costs of Pilesgrove

between Salem and Pilesgrove.
1793: Request made to hold a separate monthly meeting in Pilesgrove.
1794: With the approval of Haddonfield QM, Pilesgrove becomes “a Meeting of record,” i.e., a Monthly Meeting.
1814: First purchase of land for present cemetery on West Avenue.  Between then and 1919, four more tracts are purchased to comprise the cemetery’s current size.
1816: First burial in new cemetery, nine-year-old Hannah Pimm. At this time, Friends could elect burial in the West Avenue lot or in the old cemetery beside the meetinghouse.
1821: Letter sent to the Yearly Meeting’s Committee on Sufferings reporting on the imprisonments and fines imposed upon individual Pilesgrove Friends for refusing to participate in military exercise. In following years, some Friends took advantage of laws exempting members of fire companies from military duty. A small, frame firehouse was built (in the space between the meetinghouse and # 1 Marlton) to be the home of a hand pumper, “Old Discipline.” It was in use into the second half of the century.
1846: To accommodate transportation needs of a growing membership, horse sheds are built near the north and east boundaries of the property. “Saddle doors,” a 19th century accommodation to accessibility, were in use at this time.
1849: With QM encouragement, a decision is made to expand the meetinghouse. Shortly thereafter, the old balcony is expanded to the new rear wall.
1873: The brick porticoes at the front and south side of the meetinghouse are replaced by a porch. Porticoes on north side of meetinghouse remain to this day.
1891: Interior is painted for the first time and new benches are installed.
1896: Friends Boarding Home established across North Main Street from meetinghouse.
1907: Original Annex section is built, a frame building, open to the rafters, with electric lights, and a brick-enclosed stove beneath the floor.
1910: North Main Street is widened and paved, necessitating the removal of the brick wall in the front of the property. The used bricks are moved to West Avenue in order to build a low wall in front of the cemetery.
1915: Piano introduced into meetinghouse.
1925: A tennis court is installed [on the site of the present parking lot].
1926: Stove purchased for Annex kitchen. First oyster supper held.
1928: The partition, separating the men’s and women’s meetings is removed; a new roof is installed; benches in the balcony are removed, the floor leveled, and the area is enclosed for use as classrooms; four coal stoves are removed, sold, and steam heat is installed with a library room above the boiler room; new benches are purchased; the coal house is removed and the now unused horse sheds are stacked with kindling. The Committee of Trustees spends in excess of $8000 this year, putting it $1500 in debt, which it expects to pay off in the following summer and fall.
1929: Name of Pilesgrove Monthly Meeting changed to Woodstown Monthly Meeting.
1932 & 1935: Second and third tennis courts installed, necessitating the removal of all old gravestones to the West Avenue cemetery.
1938: The meetinghouse is wired for electricity to accommodate the gift of an electric clock.
1946: The driveway is paved for the first time.
1949: New roof put on Annex.
1955: The Annex is connected to the meetinghouse via a library room with folding doors. The new addition is brick, so the original structure is brickfaced to match. A new hot-air heating system is installed; two restrooms added.
1956-7: Annex is rented to Woodstown-Pilesgrove Board of Education for use as kindergarten classrooms.
1965-6 Social room is built; entire floor of meetinghouse is replaced and carpeted, new ceiling and lighting are installed, some floorboards and beams are used in new Social Room; addition made to Annex kitchen; all tennis courts removed.
1974: More additions to Annex kitchen
1976: $40,000 loaned to Friends Home for building project.
1980’s: New roof installed on Annex.
1990’s: One classroom converted to office space for QM Coordinator’s office; light switches[!] installed on walls near stairs in meetinghouse and at doors of Annex.
2001: Ceiling fans installed in meetinghouse and energy efficient lighting in meetinghouse, Annex, and Social Room.
2010: Vestibule between Annex and Social Room wing with handicapped accessible restroom and two interior ramps is built, driveway widened with new walkways and curb cuts, making entire Meetinghouse complex ADA compliant.

2011: Mural of Monthly Meeting Ice Cream Social, depicting horse-drawn carriages and the North Main Street wall, is donated to the monthly meeting and installed in the Annex dining room. The mural had hung in the old offices of Richman's Ice Cream.

What if?
Assuming that a “lifetime” is equal to eighty years or so, what would be different in our meetinghouse a lifetime ago?
Well, the driveway, unpaved, would be dusty in summer and muddy in winter. There would be no electricity in the meetinghouse, but there would be four coal stoves. Two would be located on each side of the partition that separated the men’s and women’s meetings for business. There would be no classrooms upstairs and to reach the Annex you would have to go outdoors.

If a Friend of the early 20th century could travel seventy-five years back in time, how would the meetinghouse seem different?
There would be no Annex, no piano, no porch, but there would be two cemeteries and a brick wall separating the meetinghouse from North Main Street. The interior would be considerably darker because it was not yet painted white. The entire floor area occupied by today’s facing benches would be outside the walls. No one would ever have heard of Friends Village.

And what if that pre-Civil War Friend could “visit” the monthly meeting of a “lifetime” previous?
Obviously, there would be no brick meetinghouse resembling today’s. Woodstown – whoops! – Pilesgrove Friends would be traveling to Salem for Monthly Meeting for Business and seriously considering how to replace their current [and probably inadequate] meetinghouse with something suitable for a growing membership. 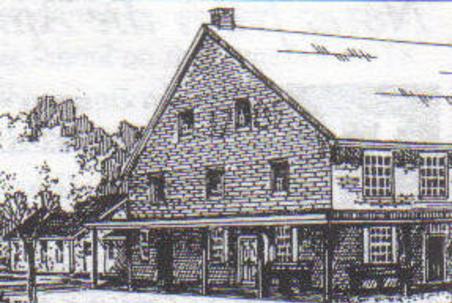