There is an old adage that says, “The best time to plant a tree is 20 years ago.  The next best time is today."​

As many of you know, the parent of our sapling was the landmark tree on West Broadway, in Salem.  It was named the largest white oak tree in New Jersey, by the New Jersey Department of Environmental Protection.   Sadly,  the Salem Oak uprooted and collapsed on June 6, 2019.
Unlike any other local landmark, the Salem Oak was a living reminder of Salem County's history.  Estimated to be between 560 to 580 years old, this ancient tree is said to have provided shade for the Lenni Lenape,  who lived peacefully  with one another upon this territory for thousands of years.
The Salem Oak is believed to be a part of the original forest that covered Salem County. Salem was established in 1675 by the English Quaker, John Fenwick.  Local lore maintains that upon his arrival here in 1675,  John Fenwick met and is said to have made covenants with these same Native Americans in the shade of the Salem Oak.  This was one of the few treaties with Native Americans that was never broken.
In 1876,  a sapling from the mother tree was planted in the Salem Presbyterian Cemetery on Grant Street.  Known as the Centennial Oak, the tree survives and thrives there today.  Fifty years later,  in 1926, three of the oak’s offspring were planted along the George Washington Memorial Parkway near Washington, D. C., as part of the nation’s observance of its sesquicentennial.  The following year, on Oct. 21st,  just five months after his historic trans-Atlantic flight, Charles Lindbergh flew over the now famous tree in the “Spirit of St. Louis” as part of a national tour and dropped a message for the citizens of Salem.
So, as you can see, by planting and nurturing this sapling, here, at our Meeting, we are making a covenant of sorts with past generations.  That promise will be to continue to pass on to future generations, the tale of the inspiring lineage of OUR OWN Woodstown-Salem Oak. 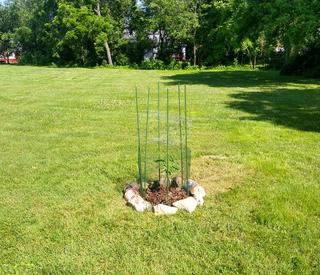